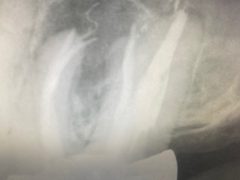 I posted earlier on this sub but my new question is different and I figured I would post a separate question for others who may search the same thing. I would appreciate any advice.

Context: I am a 25 year old male. My number 15 molar tooth has had 2 root canal treatments but acted up recently . My dentist and oral surgeon recommend it be extracted as there is likely an abscess. It hurt when I was chewing or biting for 1.5 days last week, then stopped. This prompted my visit to my dentist. It hasn’t hurt since, but my dentist put me on Amoxicillin just to be safe.

I am going on a 3 day trip and flying on a 5 hour flight next Friday that I can’t miss. I am debating whether to extract the tooth on Monday and have 4 days of rest before the flight, or whether to wait till after.

I am most concerned about question #1. My preference is to wait until I return to extract the tooth but I am worried after reading online that it will become very painful during flight. I have been given another

I’ve had braces for over 2 years and I’m supposed to be getting them off shortly. I switched orthodontist offices and they took off basically everything I had on “because my teeth looked good and he wants them to settle” so they only have a wire on 4 teeth on top and 4 on bottom. I’m kind of sketched, because I think my teeth will go back to how they were. And they’re doing this to get more money. Am I overthinking or does this make sense? 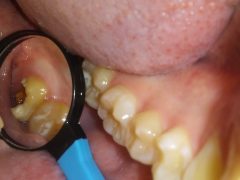 Although I’ve had a relatively good dental routine for the last several months, there was a period of my life where I rarely brushed my teeth, going weeks or months between brushings. Today while going through my usual routine, while swishing my mouth wash around, I suddenly felt several solid chips of tooth, and after spitting it out and feeling with my finger, I confirmed that one of my teeth had just fallen apart. It caught me off guard because I haven’t had any pain in that tooth or any nearby teeth, nor have I experienced any problems with it. After looking at it closer I realized it was one of my wisdom teeth.

My question is essentially, is it possible that this tooth dying is not because of poor dental hygiene? I’ve heard of wisdom teeth dying on their own, regardless of how good or bad the person’s dental hygiene was. It would break my heart to know that my neglect has led to at least one tooth completely dying, and really scary to think that others could suffer the same fate, unable to do anything about it.

Is it okay to swallow saliva after brushing with this? I know I’m supposed to let it sit for 30 minutes without rinsing or drinking liquids but how about swallowing?

Is it normal to have to go back after a filling to get teeth polished? I dread fillings because my teeth no longer have the smooth texture while flossing in between teeth. It feels quite jagged but no floss breaks. I think I’ve had to go back every time I had a filling done… just wondering if this is a common thing? 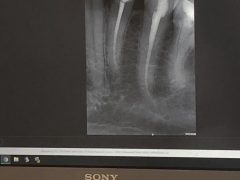 Hi I’m referring to my molar. #19. I know it is not the best picture but I took this at my endo office after he preformed a root canal. I feel pain around the area where the molar is and #20. https://imgur.com/RipBoya

I just saw a Dr who said my filling for the cavity broke off and it is important to fill it back before it reaches the root. Keep in mind I have no idea how this works. He couldn’t do the filling today. How urgent is the next appointment? I really don’t want to end up with a root canal.

Pain wise I can still eat, usually something hot or cold will give a slight discomfort but eases away. Just feels “sore” around that area after my cleaning. How soon should I schedule this? How can I avoid a root canal?

My gums are inflamed and has been hurting for the whole day. I have crowns for 2 months now. It never hurt this much. (I used to have crowns too just changed it)

Got a filling done today for the tiniest chip I had on my tooth. Can I smoke a blunt or will this affect it?

Last Tuesday I went to my dentist to replace a filling because I had mild sensitivity.

She did a panoramic x ray a week before and didn’t notice any cavity. Then did the regular cleaning and another local scan on the lower right side, where the filling was. She said there isn’t any visible cavity (on the 30th tooth) but we can replace the filling as it was quite old and pretty big. While she drilled to replace it, she found a cavity pretty close to the gum between molars 30 and 31, so she repaired it and placed a filling. While she was drying around before placing the filling I felt intense pain and I actually teared up while she worked, it hurt pretty bad. She injected more anaesthetic but it didn’t seem to work, I heard her saying ‘I don’t understand why is it so sensitive, I injected anaesthetic in 7 places’ to the nurse. She also complained that there was a lot of saliva (she used a rubber dam that broke badly from what I’ve heard her talking to the nurse and my gum was bleeding quite a bit) under the dam and around the tooth. Could the filling have gotten contaminated with saliva? I was just very tensed up because of the pain, before going in to replace the filling I just assumed the mild sensitivity was from grinding my teeth at night while wearing retainers.

But since then, the new filling is sensitive to cold still and the places she injected the anesthetic into are still pretty sore. Also the 3rd tooth started being a bit sensitive to cold (the one directly above the 30th, it has a filling as well).

Should I go back to check with her or is this sensitivity normal? She